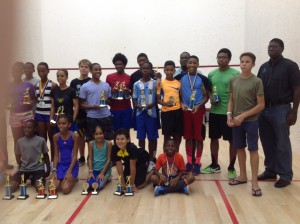 Shemane Griffith firmly commanded his place as Barbados’ top Junior Squash player in the recently concluded Sagicor General Insurance Barbados Junior National Squash Championships.  Taking both the boys’ U17 and U19 titles, Griffith was also adjudged the most improved player (boys).  The 15year old, who is on a squash scholarship along with older brother Benjamin Griffith at Avon Old Farm School in Connecticut, defeated his older brother Ben in the U19 finals.

The Boys’ competition was fierce.  The Griffith brothers finished 1st and 2nd and Khamal Cumberbatch 3rd in the U19 division. In the U17 division, Shemane edged out Reginald Brewster in a nail-biting five setter.  This was an open competition, which allowed Amanda Haywood to come up against the boys; she deftly captured the 3rd place medal. 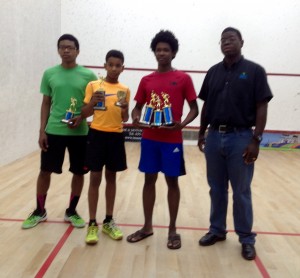 Khamal Cumberbatch , retained the U15 title defeating Joshua Seale into 2nd place and Chemar Burnham finished 3rd. Darien Benn, who has been steadily improving, took both the U11 & U13 boys’ title from Alex Stewart in both divisions. Ryan Archer finished 3rd in the U 13 and Sumairaa Suleman finished 3rd in the open U11.

The girls’ competition held no surprises.  Amanda Haywood won the U17 division and was voted the most improved player (girls).  She defeated Chelsie Samuels for 2nd and Jada Smith- Padmore for 3rd place . US Open U13 top finisher Megan Best claimed the U 15 division defeating Jada Smith-Padimore who finished 2nd and Sumairaa Suleman finished 3rd. In the U13 division Megan retained her title by defeating Chelsie Samuel who recently won the U13 division in St. Vincent & the Grenadines earlier in February.

Zachary Gill received the “Best sportsmanship award” for his behavior on and off the courts.

President of the Barbados Squash Association, Monty Cumberbatch thanked Assistant Vice President of Marketing at Sagicor, Roger Spencer for sponsoring the championship for the last 30 years and said that he look forward to Sagicor’s continued support. Cumberbatch said that he was pleased with the standard of play as the“Barbados’ junior players have been on an upward trajectory for the past two years and this is largely due to the Junior Development Program and the personal training the players have been undertaking .